On an autumnal afternoon in Silsden, West Yorkshire, Guisborough Town completely dominated their hosts in a thrilling 5-3 win.

The first ten minutes saw relatively little action from either side, but a lovely through ball from Mason McNeill in the 12th minute found Brandon ‘Donny’ Holdsworth one-on-one with the Silsden goalkeeper, and he calmly rounded him to open the scoring and send the Priorymen 1-0 up against their hosts. Ironically, Donny was named on the bench at the start of the game – he only started due to an unfortunate injury sustained to fellow youngster Shawn Spozio during the warm-up.

Another one of Guisborough’s heroes of the day was second-choice goalkeeper, Jaan ‘Yak’ Yaqub. He commanded the area throughout the game, and was equal to many Silsden shots, including a spectacular save in the 24th minute which stopped what would have undoubtedly been the equaliser.

Half an hour into the game Guisborough’s number 10 – SonniColeman – fancied some of the action (as usual!) and was quick to chase down a shot spilled by the Silsden goalkeeper, and scored Guisborough’s second of the game, to the great delight of Guisborough’s travelling fans.

To give credit to Silsden, they never gave up, despite being 2-0 down within half an hour, and they responded through their number 10, Khurram Shazad, and his rocket of a shot from twenty yards flew past the Guisborough back line and into the top left corner of the net to give the Sils a goal in the 34thminute.

The game kicked into action for the remainder of the half, and the Guisborough fans, players and coaches were delighted when the two forwards linked up again, this time in the 43rdminute, with Sonni Coleman facing the onrushing Silsden goalkeeper, and cleverly squaring the ball to Donny who was a mere five yards out, and tapped it into an empty Silsden net to give the Priorymen a 3-1 lead going into the break.

Guisborough started the second half with a substitution, bringing on experienced midfielder Brian Close in place of Paul Young, and, despite the score line, the second half got off to a slow start. Once again, Yak was equal to the Silsden forwards who were desperate to shorten the two-goal deficit, and he produced a multitude of saves to ensure that Guisborough stayed on top.

The Priorymen kept battling, and once again it was SonniColeman who was called upon and he sent a header straight into the back of the Silsden net, giving Guisborough a 4-1 lead, and Sonni his second of the game in the 59th minute.

Guisborough’s next substitution saw Christian Selby replace Donny, who came off to a round of applause from the Guisborough bench for his two goals in the first half.

In the 70th minute, Guisborough once again found the net, with Sonni Coleman getting his second hattrick of the season – what a player!

A minute later, Guisborough made their final change, with veteran Gary Wood coming on to replace the man of the hour, Sonni. I know we say this a lot here at Guisborough Town FC, but that was surely one of Sonni’s finest performances in a Guisborough shirt to date!

A Guisborough corner floated into the box in the 76th minute, and Brian Close was blatantly pushed in the back, and hit the floor in what was surely a stonewall penalty, but despite the shouts from the Guisborough players, the referee waved play on. Brian was obviously disappointed with the decision, and after a few choice words with the referee, the referee decided to show Brian a straight red card, leaving the Priorymen to play the remainder of the game with 10 men.

Silsden capitalised on this opportunity, and another rocket of a shot from Shazad evaded the Guisborough defence and left Yak helpless as the ball flew into the top corner in the 83rdminute.

In the 87th minute, some poor clearing from Guisborough’s back line left Silsden with a free shot on goal, and it was Joe Mitchell who scored their third of the afternoon.

But Silsden’s two late goals were mere consolations, as after two minutes of added time, the referee blew for full time and sent Guisborough home as 5-3 winners and into the next round of the FA Vase!

Gary Forster was left thrilled with his side’s performance given his post-match comments: “I think it’s an excellent achievement to come here with eight first-team players missing, although in saying that, we have a squad full of first-teamers, which has been demonstrated today with the togetherness we’ve shown on the pitch. Donny was over the moon to have scored a brace, and it’s great news that Sonnihas got another hattrick to his name: he’s a massive part of what we do here, he’s a massive part of the dressing room, and he’s a massive part of the club as a whole. I thought Nathan Guru was outstanding at the back today, alongside Josh Rowbotham, but obviously my man of the match has to go to Sonni for getting himself another hattrick.”

Guisborough will find out who they’re drawn against on Monday, when the First Round draw takes place. Our next home game is on Wednesday 14th October at 7:45pm, in the Ebac Northern League Division One, when we take on local rivals Thornaby at the KGV. We’d love to see you there! 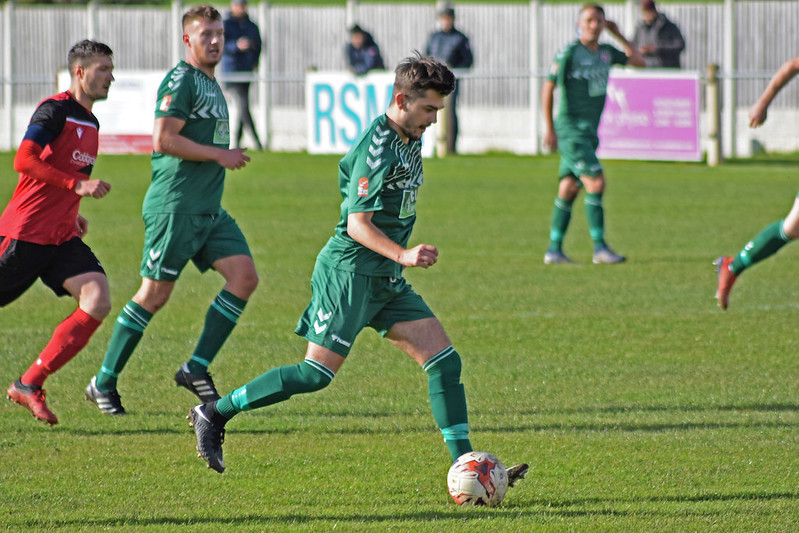